Today.
What did not happen today?

Well, I don't think I got everything on my list checked off.
I was going to plant some flowers.... but didn't return home in time to do so.
I didn't pack as much as I had wanted to.  I'm shifting to my new home in about a week... and there is a lot of packing and organizing to do.

BUT, I did do other things.

I picked up my good friend and we headed back to New Hope to cook.

We were going to spend the morning cooking for our Clinic  Christmas lunch.

That happened... but before we gathered the pans and things we needed, we were told there was a dead snake down at the farm.  A Big one.

And so we did what we
thought was best.  We hopped in the car and drove down to the farm.  Best to be in a car with a snake nearby than to be on foot near the snake.

The only problem was... that the snake was about a five minute walk into the bush.

And quickly learned that the snake wasn't dead... it was still very much alive.

And there wasn't just one snake... there was TWO!

And so, Bridget, her niece, and I were the cheerleaders.

The men were all engaged in the battle with the snakes that were tunneled under the ground.

From what I have heard, these snakes aren't full of poisonous venom, but rather constrict their victims.  And victims can be a deer, crocodile, and even a human. 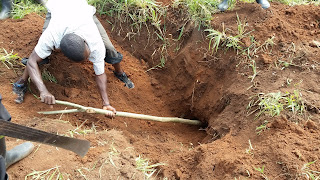 Bridget and I left the men hunting when they were still poking their stick in the hole and digging.  We had cooking to do.  And so off we went. 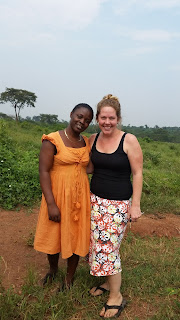 We had a blast as we cooked the big clinic meal.  There were matooke to peel (green bananas), charcoal to light, and a chicken to kill.  I took no part in the killing of the chicken.... but I did need to help prepare it.  Defeathering a freshly killed chicken can leave one questioning whether they will ever want to eat meat again.  I kept saying sorry to the chicken... looking to where it's head was to reassure it... only to be startled by the absence of the head.  The head was somewhere in the bush. 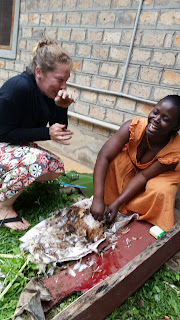 And so... as we prepared our chicken and matooke, the men were finishing their snake hunt.
Hidden in the ground, were two snakes.  Both over 10 feet long.  And now they were both dead. 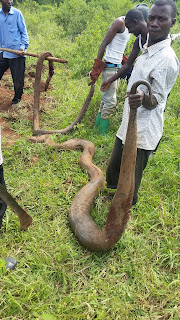 Here, you kill snakes.  I know it sounds cruel.  But, it's necessary.  Snakes are deadly.
They aren't the cute little gardner snakes of the midwest (are those even cute?).

And after a great day full of laughter, a few screams, and some sweet times with dear friends, I picked up sweet little Subbe and just held him.  All 2.5 lbs of his sweet self. 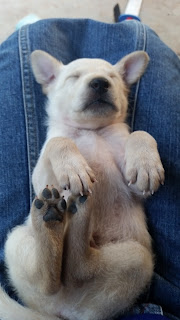 And so dear friends.  That was today.  Some dying.  But there was also a WHOLE lot of living.

Laughing.  Being.  Laughing some more.  And embracing today.