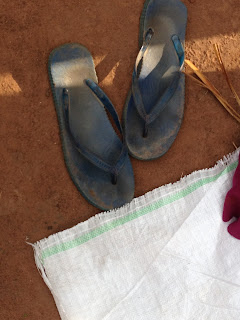 I can see the reflection of miles walked.

Can almost see the weight of kilos carried.

The imprint of toes.

The whiteness of a flour sack seemingly unscathed by the elements of life near the equator where dust and rain are often intermingled.

And somehow, in the stillness of rubber sandals, I can see rest.

But maybe a different kind of rest than one that often comes to mind when the word rest is spoken.  Something deeper than sleep.  deeper than reading a book in the calm of a gentle breeze.

I think I'm referring to r.e.s.t when the winds blowing and the demands of life are pulling.
Maybe pulling more than usual.  When the pressure is high and the demands equally as high.  And yet... somehow there is r/e/s/t.  It is not something I have mastered.  If I were to adjust this picture to communicate my heart.  I would slap more dirt on those flip flops.  The white flour sack would surely have the remnants of dirt.... tracks from a hurried passing.... and quite possibly some tears.   And by tears I mean rips not drops of moisture from the eyes.... though I know those kind of tears would be there too.   Hopefully, I would leave some whiteness.... because somehow it's in the newness of that sack that I see rest..  The freshness of the green strip and the crease of a fold still clearly present.

Earlier this year, the Lord really impressed upon my heart the need for Margin.  And it was something that by HIS grace and HIS grace alone that came back with me to Uganda.  Many mornings, I would wake shortly after the chickens (k, often a lot later than the chickens) and go out for a long morning walk.  It was an opportunity to think, pray, and be.  The day was often just beginning around me (minus those chickens!)  Men were attending to the cows.  Birds were greeting the day with their twirps.  And my heart was transitioning from sleep to awakeness.  Those steps were just part of the margin in days that were full and rich.  Hard and Sweet.  Stretching and natural.

Language seems to roll more quickly off my tongue.  Though I know my Uganda brothers and sisters would smile.  Rolling off my tongue is probably not an accurate statement.  In truth, it still crawls.  But the crawling is no longer an army crawl.  It at least comes.  And for that I am thankful.

Time at the clinic has been rich.  My coworkers have become dear friends.  It has been so good to be back.  Listening to lungs.  Peeking into ears.  And taking care of those who come in with needs.  A few Saturdays ago, we had an ER doctor come in for a a morning.  It was such a blessing.   It was a sweet time of learning from a doctor whose been taking care of patients for years.  It was also a sweet time to learn how to suture up a laceration.  Thankfully, we didn't have to practice on a live person.  Instead, I took a blade to an avocado.  And after creating a large laceration, we slowly put it together again.  Lots of practice.  And an avocado was put back together more so than Mr. Humpty Dumpty.

Back in the spring when I was figuring out my plans for my return trip back to the States, there was an error in the booking of my flight.  I remember noting the error and deciding to just roll with it. The Lord was leading even as He gave peace about a plane ticket and the timing of that ticket.  He led even in a simple mistake.  As most of you know, I have had the honor of journeying along Ketty and her family the last year and a half.  Ketty has become a dear friend to me.  At the end of June, Ketty's condition started to deteriorate.  We knew the cancer was back.  I've blogged a bit about it.   But not very much.  My last month at New Hope was full.  It was Hard.  It was rich.  It was a whole lot of everything.  Several times, we thought Ketty was going.  Going home to heaven.  Her body is weak.  Seizures have come and gone.  Some intense, others only seen by the flickering of her eyelids.  It has been a season of sitting.  Being.  Washing.  Repositioning.  Remembering.  Watching.  Long hours well worth it.

I've watched as a man brought a bag of sugar to the bedside of his sick "mom".  His body is that of a man, his mind that of a young child.  And he brought what He can.  And it is a gift that will forever be impressed in my mind...in my heart.

I've watched as a community came to Ketty's house.  They sang.  They prayed.  And they encouraged a family deep in the trenches of hardness.  Hardness not without hope.  Ketty, weak by her journey clearly stated, "I know where I am going".

Her words have become fewer.  The times of sleep far outweigh the moments of being awake.  And yet, the peace is clearly present.  That has remained.

I was going to change my plane ticket.
The thought of going was a bit overwhelming.
Leaving when I wanted to be staying.
Ketty and I had journeyed so much together.
And as I prayed, I sensed Him telling me to go.
And so, with HIS peace and HIS peace alone, I went to the hospital and said "see you later" to Ketty.
She was sleepy.  Her eyelids danced a bit as her brain struggled.
And I told Ketty.
"I'll see you later when I return.... OR you will be in heaven dancing."
She heard me.  She acknowledged and agreed with my words.
And she drifted back off to a peaceful state. 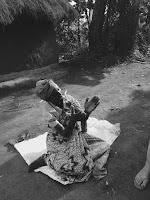 And I too, by HIS grace, remain peaceful about being her and not there.

And so I flip off my sandals.... and take a seat on the flour bag.

My shoes carry their own indentations.  Their own evidence of miles walked.  The shoes look different on each of us, but the rest, no matter where we have walked... where we are walking... or where we will walk...

well that rest is available to us all. 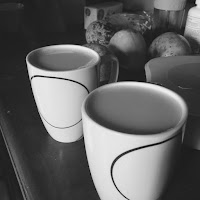 The Lord is My Shepherd; I shall not want.  He makes me lie down in green pastures.  He leads me beside still waters.  He restores my soul.  He leads me in paths of righteousness for His name's sake.  Even though I walk through eh valley of the shadow of death, I will fear no evil, for you are with me. your rod and your staff, they comfort me.  You prepare a table before me in the presence o my enemies; you anoint my head with oil, my cup overflows.  Surely goodness and mercy shall follow me all the days of my life, and I shall dwell in the house of the Lord forever.  (Psalm 23)