A Plane, some Paint, and a crazy wild bus!

Wow.  Yep, that is the way in which I am starting this blog post.  At least that is the way that I am starting it after having started and stopped multiple times in the last little bit.  It feels like there is much to say.  Because in reality there is.  Right now, I am back in Nairobi.  Sitting in the main room listening to the sound of shuffling of cards as a game is about to start and the casual stroll of an individual passing through.  I would love to say that I have a cup of hot tea next to me... but the reality is I don't.  Though, it's very possible that by the time I finish this post, I will.  It is surprisingly cool in Nairobi.  As I was pulling up my blog, I saw that my last post was just over a month ago.  I also realize that the newsletter that I finished back in MAY... is still on my computer.  a BIG arghh.  I could fairly blame the internet.  It is near nonexistent in my house.  Though, I confess that if I position my computer on my bed JUST write... I can sometimes pick up the signal.  But it's not about blaming anything.  The reality is that it was a whirlwind of a month.  To be honest, I can't even believe that June is nearly over.  I will apologize for the poor communication and then walk in His grace.  And so I am walking.... walking into a review of the last month.

It was a month ago today that Ketty and I boarded a plane from Nairobi to Entebbe.  She had finished her first round of chemo and radiation and was eager to get back to her hubby and children.  After landing in Entebbe in the morning, I did my best to stall us as long as I could in Kampala.  I knew that a fun greeting was waiting for her.... I just had to make sure I synced our time.   And so I found every reason to not go back to Kasana.  Finally, after much stalling.... we began our journey back to our Kasana Family.

While in Nairobi with A. Ketty, I received the phone call telling me that Caleb was very, very sick.  He had been sick for several weeks prior to my going to Nairobi, but his condition had only worsened and he had been rushed to Kampala after having a fever over 107 F.  Caleb was escorted back to the States by one of my colleagues.  Alair remained back with Nico, Nate, and baby Norah.  It has been a rich month of being able to spend time with Alair and her kids, go with her to Kampala to work on needed paperwork, and live life together.  I am thankful for our friendship and am standing in faith with her as we trust God with His timing for her impending return back to the States with her kids. 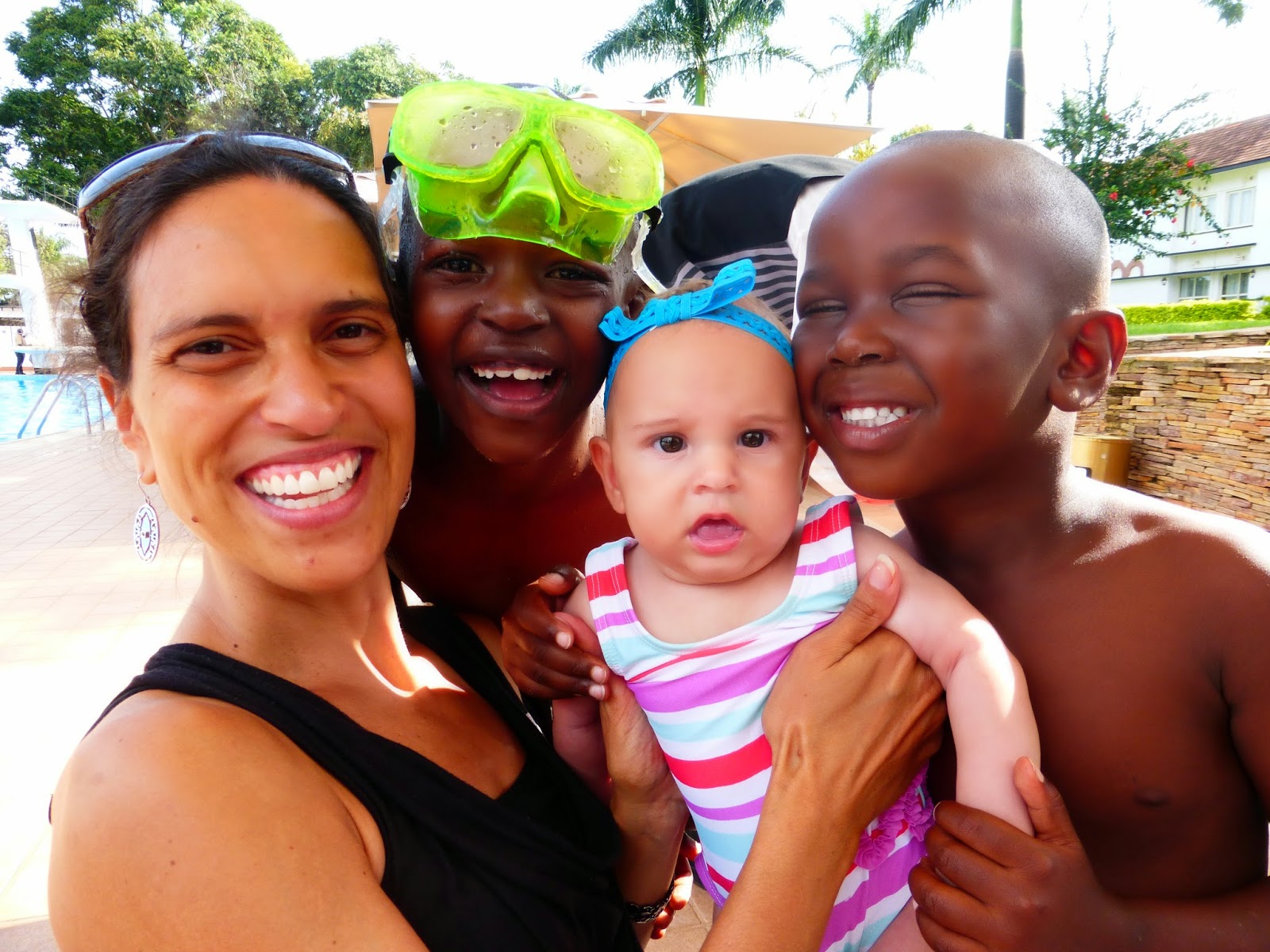 One morning as I was leaving Alair's house, I saw a snake out of the corner of my eye.  I thought it was a toy snake... one of those plastic things that boys love to play with.  Just as I was about to take a step, I thought it would be wise to move the rocks and see if it would move.  (Thank you Jesus!).  In response to my kick of the rocks, the snake moved.  I calmly called a friend.  And then the snake started slithering away. I grabbed a bat and started pummeling the thing.  As you can see... it was very dead... very quickly. 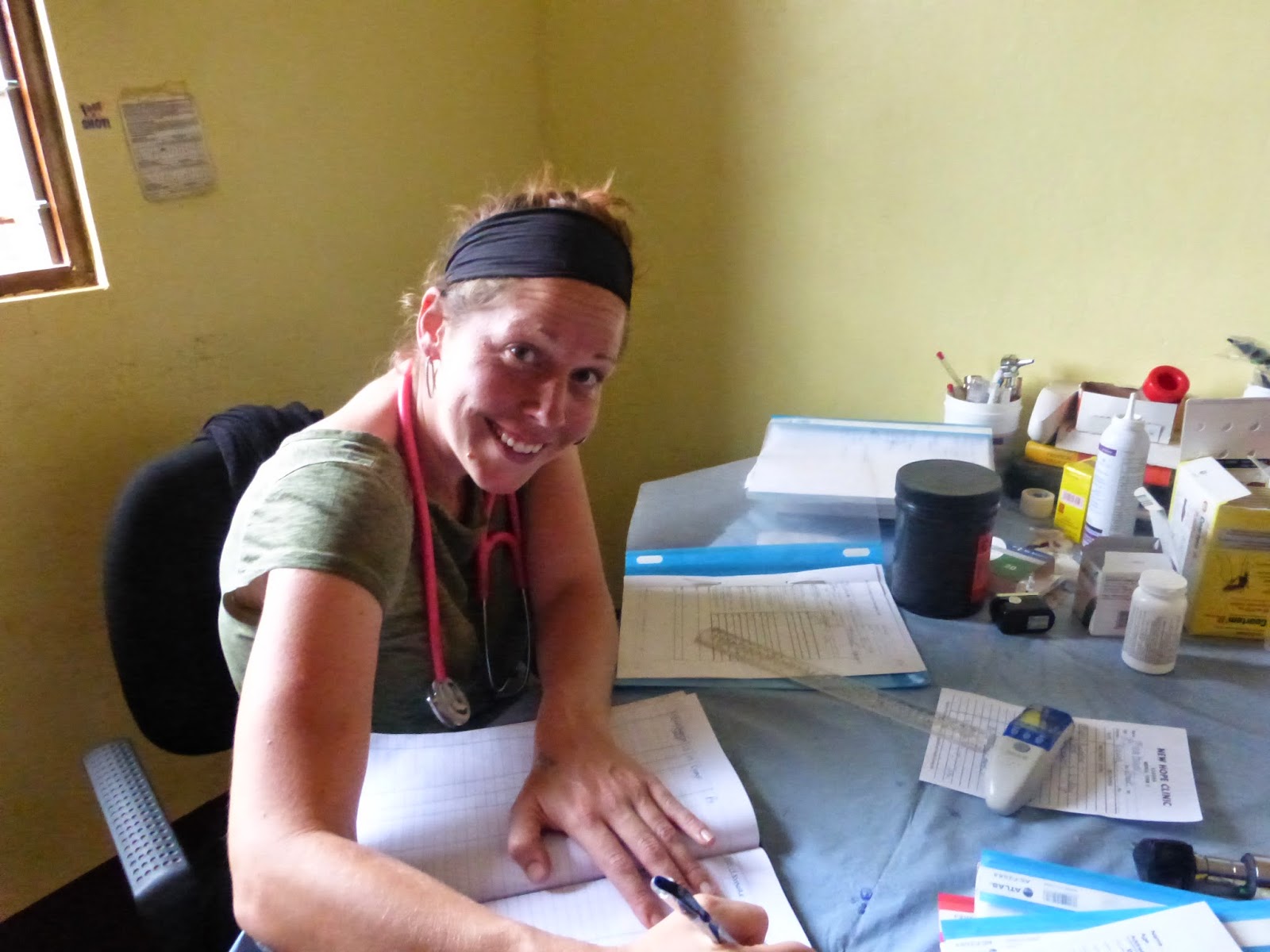 It's been a pretty significant month at the clinic.  Lots and lots of opportunities to love on MANY children fighting a variety of illnesses.   Chickenpox has found it's way to New Hope!  Calamine lotion, education, and pain medicine have been the prescription of choice. There has also been malaria, viruses, and coughs.  Lots of "normal". Lots of opportunities to love on and nurture both children and staff.  We have also been blessed with LOTS of donations this month.  We received nearly 5 FULL bins FULL of medical goodies.  And as we unpacked, we watched how God is so into the details.  In one of the containers, there were two boxes of hemorrhoid medication.  A need that we hadn't advertised.  When I asked the team leader about it, he basically told me that that medicine had been put in the bin on accident... I just smiled.  Maybe an accident on a human level... but for sure, God knew we needed it.  A similar thing happened when I was given a bunch of albuterol. Unknown to the one giving it to me... we had one unopened vile left on our shelf.

My home church from Fort Wayne came as well! In fact, they helped deliver some of the donations to the clinic.  They came to be, to encourage, and to bless.  And BLESS they did! They painted much of the clinic..... working hard to prepare the walls and paint them.  They blessed so many by the use of the their time and talent.  Thank you!


Friday was a FULL day.  It included some solid time with the team.... and some hard goodbyes.  It was an early morning "see you later" to Alair and kids... in anticipation that by the time I return from Nairobi... they will be reunited with Caleb in the States.  Nothing is confirmed, but in faith, we said goodbye.  Later in the day, it was see you later to Natasha... a dear friend who is beginning the next chapter in her life.  And at the end of the day, it was goodbye to the BlackHawk Team.... a team who had blessed and served so well! Their presence here in Uganda was such a gift!   It was an emotional day.... but a day that the Lord knew about and was very much present.  Within 24 hours of saying goodbye at the airport, A. Ketty and I were boarding a bus to Nairobi.  It was a WILD ride... the most bumpy by far! But we made it... and were warmly greeted by the staff at Mayfield. 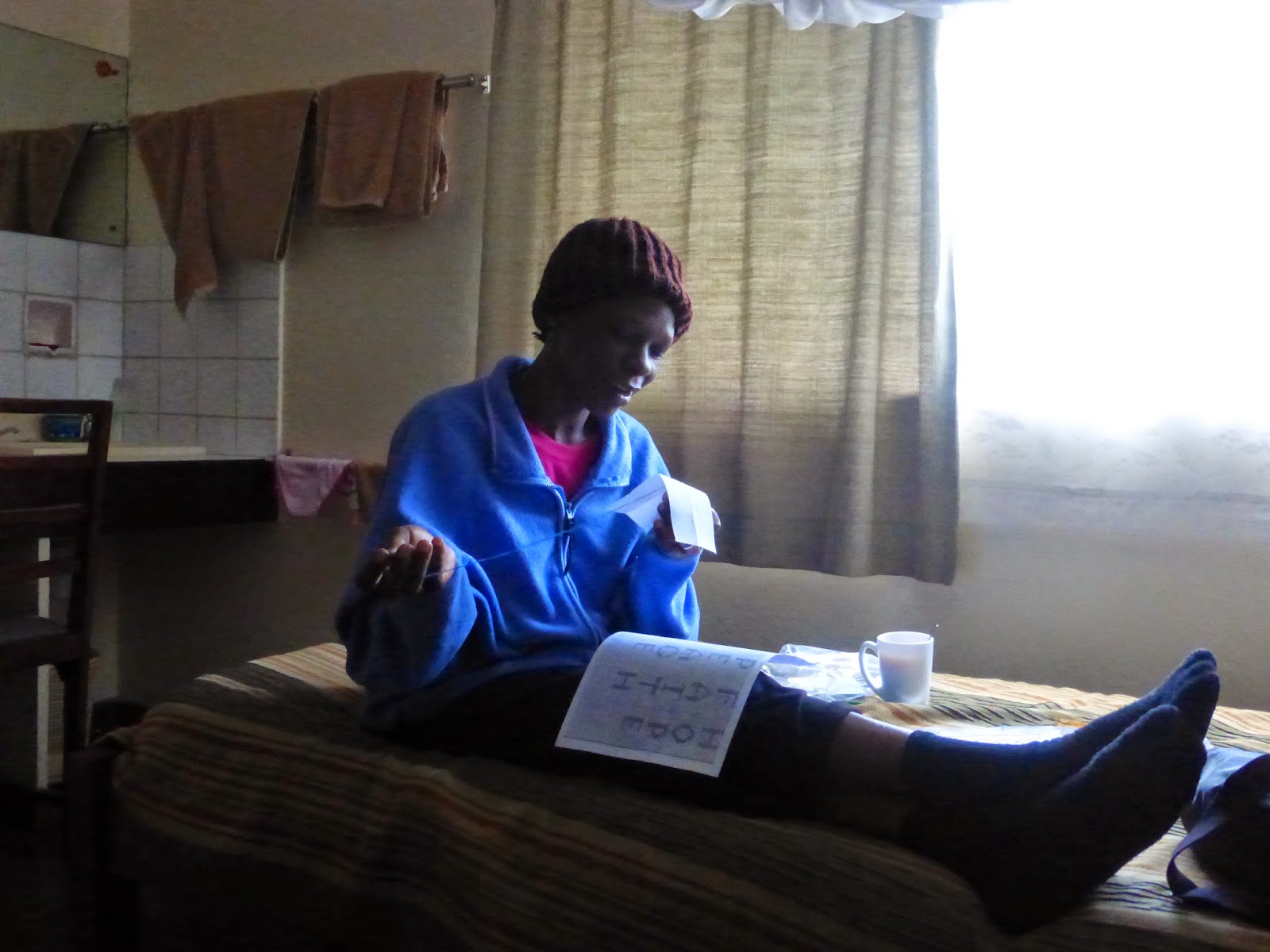 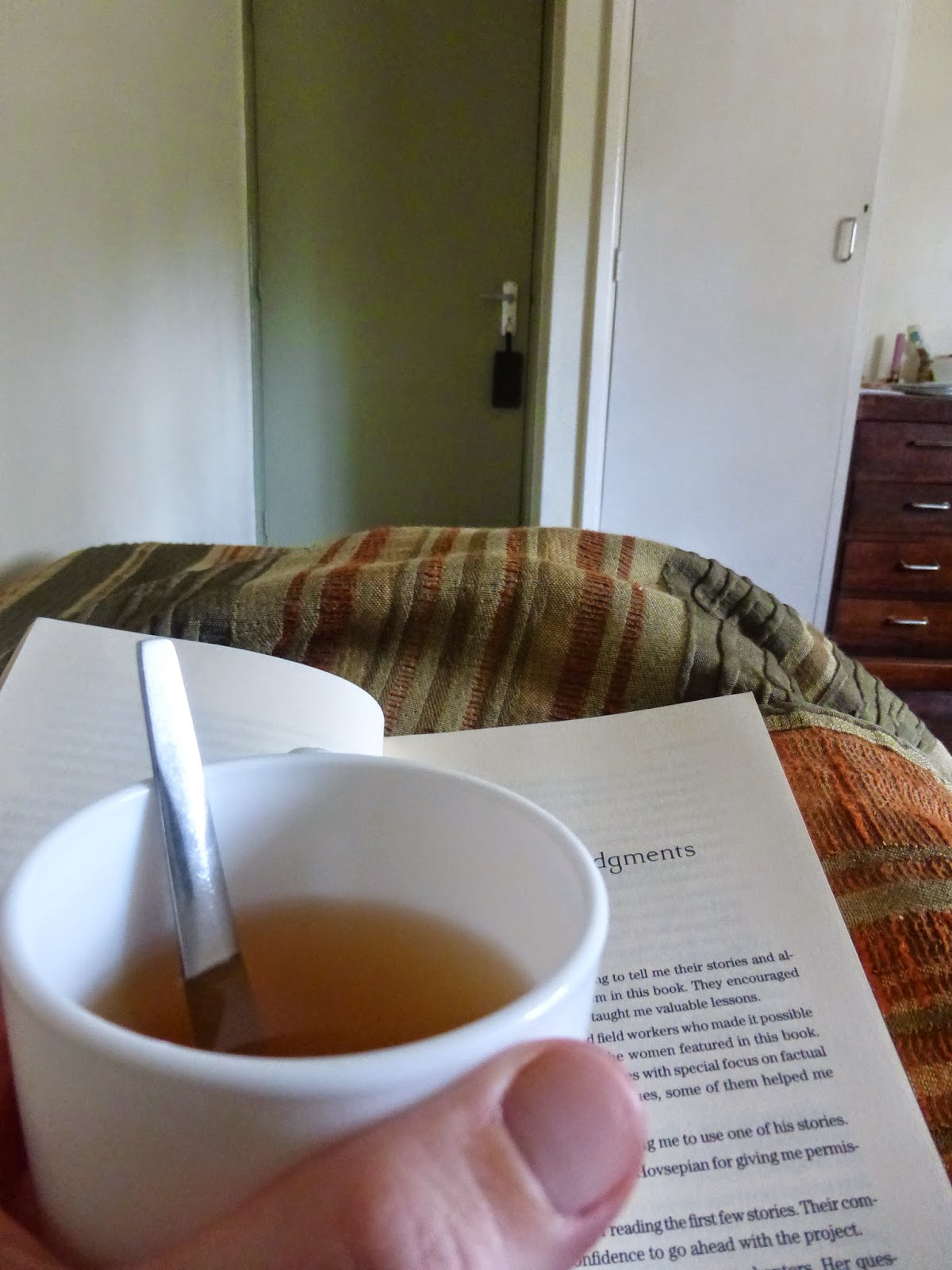 This morning, it was COLD.  I made myself some "not-so proper" tea... (Black Licorice) and decided to read a bit.  A. Ketty worked on her cross-stitch.  In the afternoon, we went to the hospital to see Dr. Abwao.  After greeting him, we talked about the next steps.  Hopefully tomorrow, Ketty will have a CT scan and some blood work. After that, she will be scheduled for an endoscopy.  Once all the information is gathered, her next treatment plan will be created and her next chapter of treatment will commence! I'll keep you posted on the next steps.

And so dear friends...  Thanks for reading this to the end.  So much has happened in the last month.... God is growing me... challenging me.... pursuing me.... and not relenting.  Even in areas of my heart that are stubborn.  He is good and I rest in that.  It continues to be a gift to be here... to be used by Him as leads.

Thank you to each one of you for your presence on this journey.  I am so thankful for you all.
Love,
Kimberly